Just a week before the mighty Windsor 3s descend into the arena that is the 9th division of the Thames Valley League, a friendly sparring game was organised against Datchet 4s.

Our local rivals rocked up to C2, a pitch fresh off sabbatical in the 2020/21 season, marginally in time for the toss – bold move considering the commute. Club Empresario Richard Charters won the toss and decided to have a bat, influenced by the overcast skies with hints of rain. Stalwarts, R.Dawson and RE.Noble strolled on to face the fierce opening bowlers from Datchet. It was their first game of the season, which was echoed by the opposition, evident in the looseners from their opening bowlers. Despite it’s rest, C2 didn’t quite have the bounce to carry through to the keeper even after a few half-trackers to start with.

R.Dawson fell early to the swinging new-ball, bowled out by Bromley for 1 run. Luckily, a fantastic partnership of 85 was struck-up by Noble and Doye as Windsor took charge, Richie showing nil effects of the CC Golf day, only 24 hours prior. A rare stumping of Noble summoned Windsor’s all-time leading run-scorer into the crease. No sooner than Charters strode in, Doyesy reached his demise, caught on after 57 brilliant runs – a surprise to all especially young Ryan. Charters cruised to a  classy 59 before being bowled, again Bromley the wicket taker. B. Lickley supported in the meanwhile and reached 23* including an outstanding straight-drive for 6, showing Lickers is more than just a well oiled Newbery bat. J. Eaton, after hyping himself up on the sidelines for 2 hours, hit a superb 6. After the ball sailed over the boundary line, Jim started to walk-off, happy with his knock but it was premature as there was still half an over left! “Leave them wanting more” he muttered to himself.

Windsor reached the break of play on 226-7, aided Datchet’s extras, who were our 3rd highest scorer.

Keen to get to the clubhouse bar before 6, Windsor came out from the pavilion with fire in their veins, and packed lunches in the belly, fervent to destroy Datchet’s top order. J. Perkins and G. Chander opened the bowling and showed some brilliant displays of accuracy and precision. A worrying moment as Datchet’s opening batsmen called in the ECB to inspect the legality of Guppy’s action. After a brief analysis of the angle of G. Chander’s elbow, the action was deemed fair and the game resumed – Guppy was nonetheless rattled.

Some brilliant displays of athleticism in the field by HA. Ziemkendorf, B. Grenier and P. Woodbridge restricted their opening bats to only 13 runs combined. Wickets for G. Chander and J. Perkins sent in their nos. 3 + 4 who put on a 50 partnership. Perkins, who spent the winter festering in disgust as Chris Dixon pipped him to the top wicket taker of 2021, James playing half the games, was ready to grow his reputation as the scourge of div 9.

Charters called for the mystery spinners Hans and Ben Grenier to put the pressure back on Datchet. Grenier who routinely chucks the ball, in the nets at least, was left unchallenged by Datchet’s over judicious batsmen.

Both spinners bowled 8 overs for 34 and 33 runs respectively, with 3 wickets between them. Datchet’s no. 3 still posed a problem so self appointed swiss army tool, Jimmy Eaton was called upon, and what a tool he is.

Marking out his run-out, Datchet’s batsmen were fearing having their middle stump uprooted. The fielders started to walk-in, anticipating a ripper of a delivery, but saw the ball sail over the batsman’s head towards the boundary. Jim had in fact slipped over before the umpire, it was called a dead-ball and Jim’s exceptional spell was yet to start. Jim unintentionally employed an ancient tactic of lowering the opposition’s expectations, bowling no-balls and half-trackers in his early overs. In his fourth-over, Jim cursed himself as the ball rolled to a stop at the batsman’s feet. It was a clever tactic-however, as Jim cleaned up in his 5th over, reaching figures of 5.3-0-29-4.

Datchet bowled out for 167 after 37.3 overs. A fine day for Windsor 3s as pre-season came to a close and the riches of the league harken, where legends will be made and tales will be told of the immortal exploits in division 9b. 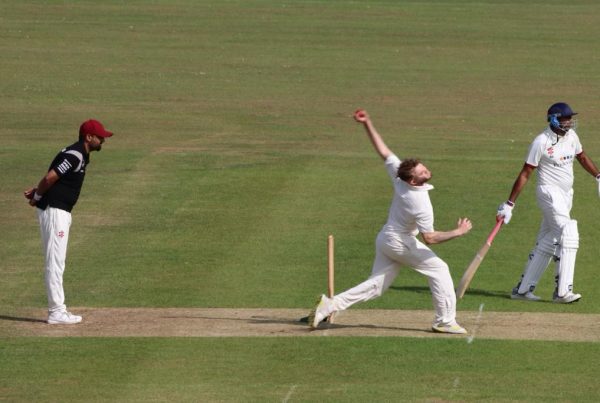